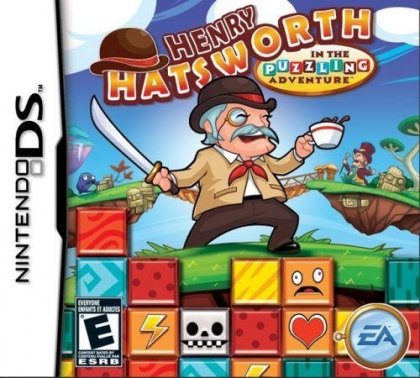 By MASTERGAMING : June 23
Poppycock! When the number one pompous adventurer, Henry Hatsworth, discovers a golden hat deep in the jungle, it makes him twenty years younger - but it also unleashes another world, releasing hordes of nasty monsters! To top it off, the number two pompous adventurer, Weaselby, is one step ahead of Hatsworth - eager to snag up the remaining pieces of the Golden Suit and claim the number one position in the Pompous Adventurer's Club for himself! Who can grab the suit, put Weaselby in his place, and seal up the other world, all before Tea Time? Why, Henry Hatsworth, of course!

Henry Hatsworth in the Puzzling Adventure is a hybrid of two styles of game - the top screen has an action-platformer starring Hatsworth, who must defeat enemies with his sword. When he does, they fall down into the Puzzle Realm on the Touch Screen, which plays like Tetris Attack. Players must match the block enemies up with other colored blocks to finally destroy them, before they rise up back to the top screen to harass Hatsworth once again.

Henry also has access to a super meter - by clearing blocks in the Puzzle Realm, he fills it up. If he fills it up enough, it's Tea Time! This means that Hatsworth can transform into superpowered steampunk robot that shoots lasers and missiles and is completely invulnerable, which is handy when the player is in a jam.