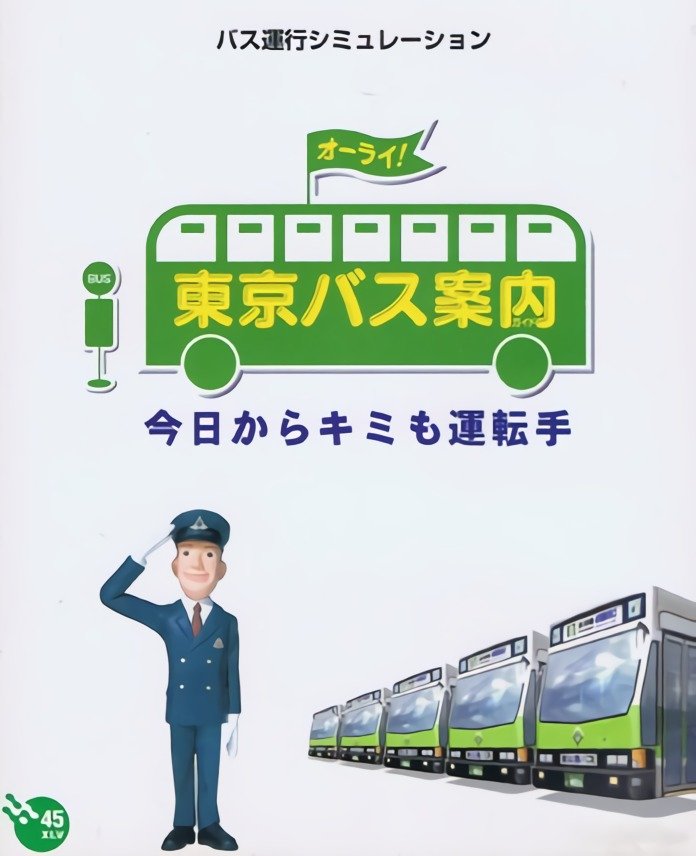 By GambierBae : May 17, 2020
Tokyo Bus Annai is a simulation game released exclusively for the Sega Dreamcast in Japan. Your job is to drive buses around Tokyo. Tokyo Bus Annai is probably as close to driving a bus in Tokyo as you could ever get. Why you would ever want to drive a bus in Tokyo is the main question, since the game is such a tedious stickler for the rules. This is not Crazy Bus, where you can take wild shortcuts in an attempt to pick up fares as quickly as possible. Nope. This is as strict a game as you could imagine. Your goal is to make it from bus stop to bus stop within the allotted amount of time (you must keep yourself on schedule, after all), while adhering to the rules of the road. What this means is that you must gradually gain speed (as opposed to simply flooring it), use your turn signals, close your doors, drive on the correct side of the road (the left in Japan, FYI), and stop at red lights. Any transgressions on your part will be met with penalty points on your "life bar." Accumulate too many penalties, which essentially reduces your bar to zero, and your game is over. The aforementioned flubs will nick away at your bar, but a major screwup, like hitting a pedestrian, will simply end your game on the spot.
Graphically, the game is efficient and unassuming. The multiple views of your bus, internal and external, look nice, as do the cars that pass you by in daily traffic. Pedestrians are of the 2D-sprite variety, and they give the game a slightly cartoonish edge that keeps the game from being too realistic. The environments are constructed well, giving you a true impression of some of Tokyo's sprawling neighborhoods. It's no MSR or Crazy Taxi, but the game looks good and moves at a consistently high frame rate. The game has a weird sense of lighting, however, and often seems like the 3D realization of a game like Theme Hospital: functional without and sense of drama. Although there are night-driving "missions," the game becomes very familiar after a while, with only three tracks to drive on. There are a number of training missions designed to inaugurate you into the world of bus driving, but they are optional.
The control is adequate, although nothing special, as analog control, mainly in the acceleration triggers, is too touchy to use gracefully. To achieve the gradual start required of TBG's drivers is not particularly easy, with the right trigger requiring too precise a touch. Since you are penalized for lateness, it quickly becomes a case of rapid-fire taps at the trigger to accelerate properly. This is surely not what the developers sought to achieve, and the controls could use a little fine-tuning. Also, it is not easy to drive a bus, and impatient gamers will soon tire of the lack of wild freestyle driving found in most other games. The complete lack of a two-player mode also cuts into the potential fun.