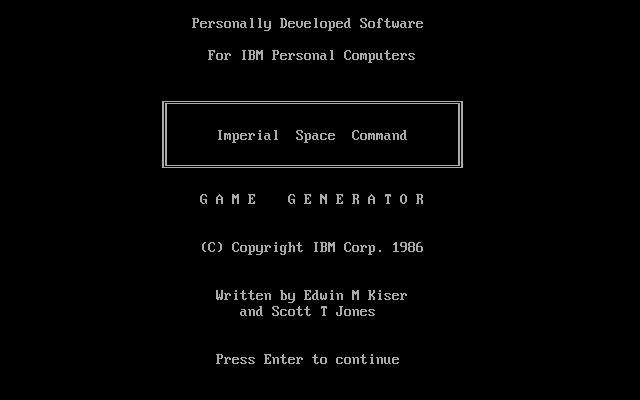 By RomStation : January 3
You command the Imperial Fleet of the One True Civilization - the descendant of a legendary Empire which once united mankind in a galactic Golden Age, but perished in a horrifying civil war. As interstellar travel ceased, the struggling, isolated remnants descended into a Dark Age, and the knowledge of old was gradually lost. However, on your planet conditions were favorable, and untold generations later, a new culture has dawned. Artifacts from the ancient Empire were unearthed and studied, forgotten arts relearned, and space travel reinvented.

But as the first test flights began to explore near space, a terrible truth was unveiled: there are Others out there. Your planet was not the only one to rediscover lost technologies and embark on a new space age; multiple competing empires are on the rise, with each laying claim to the same Imperial legacy. A new galactic conflict is brewing, and only one outcome can prove the legitimacy of your claim - complete and total victory.

Imperial Space Command is a turn-based game of interstellar war for up to 8 players (any of which may be human or computer-controlled). Multiple human players can play without communicating between them at all; they make their moves using separate player diskettes, and a Game Master processes the disks after each turn, as well as the "robot" (AI) players' moves. Non-player (renegade) forces also exist. The complex rules involve many variables, adjustable from the Game Generator at the start of each game.

One long-lost but crucial technology cannot be duplicated by any side: the mighty engines that powered the Imperial starships of old. These indestructible marvels of engineering have survived intact throughout the ages, but their inner workings remain impenetrable, and new ones cannot be constructed. Ships of different sizes and capacities may be built, but only a limited supply of existing engines can be used to drive them.

The path to victory will entail exploration and colonization of planets, setting up governmental units to cement the allegiance of your colonies, and production centers to gather wealth; tax collection and a repository/treasury system to manage that wealth; constructing, equipping and managing ships and fleets; and engaging in ship-to-ship combat, planetary bombardment and invasion to overcome rival empires and renegade forces. If that wasn't enough, your colonies run the risk of plagues, revolutions and states of anarchy.