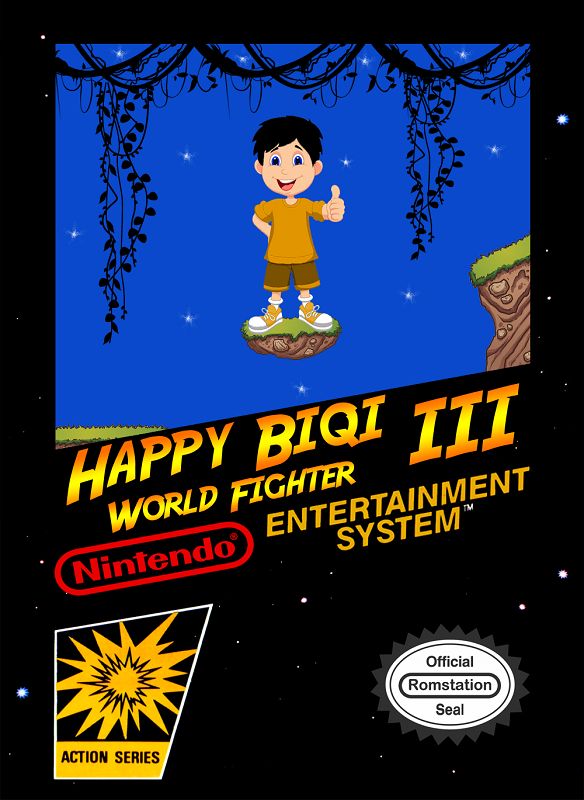 Happy Biqi III: World Fighter (also known as Happy Biqi - World Flghter on multicarts) is a clone of Earthworm Jim 2, made by Waixing in 1996, despite the copyrights presumably being registered in 1997. This is a port of the SNES version of Earthworm Jim 2.

Unlike other NES ports of Earthworm Jim 2, this one doesn't use Jim as the main character. Instead, the player can control a regular kid (by the name of Biqi) through some stages taken from the original Earthworm Jim 2: Wood Hills (Anything But Tangerines), Water Monster Tunnel (Villi People), Flight (The Flyin' King), Farm (Udderly Abducted), Mine (Inflated Head), Electric City (See Jim Run, Run Jim Run) and Puppy Love stages. The stage names that are in English were taken from versions of the game found on Waixing's multicarts.

Compared to Earthworm Jim 2, presumably due to memory limitations, the maximum ammo is 255 bullets, whereas the original game allows up to 1000 at maximum. The movement is somewhat slow in Water Monster Tunnel, compared to the original or other NES ports which move at a very fast pace.

All music used in this game is Waixing's original work, except the Puppy Love music which uses a rendition from the original game.
After completing a level, a scene showing Biqi and the princess appears, and in both versions the credits are in Chinese.