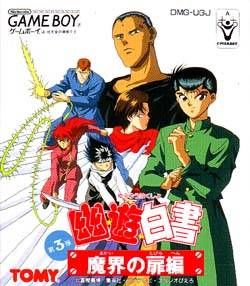 The game is much different than any other Yu Yu Hakusho game, it is a role-playing game where you can interact with other characters but if you enter a building it will turn into a side scrolling beat em up level. It is much similar in gameplay to Legend of Zelda II: The Adventure of Link for the NES. The game follows the Chapter Black Saga and begins with Atsuko waking Yusuke up for school.

The game begins in a free roam RPG mode but when you enter Sarayashiki Junior High it is a beat em up and you fight some of the school punks and bullies throughout the level.

At the end of the level, Yusuke talks to Kuwabara who wants to go to the Megallica Rock Concert and they have an argument over which is more important, stopping the portal between the living and demon worlds or going to a rock concert. Yusuke fights Kuwabara who is the first boss of the game. The game ends with Yusuke defeating Sensui, Sensui is the final boss of the game.