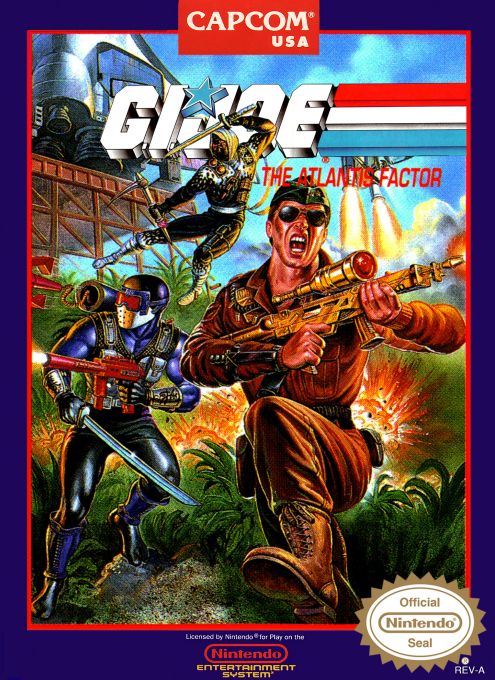 By TompouceGabriel : October 17, 2016
Cobra, the evil villain, previous encounter with G.I. Joe ended with Cobras base been destroyed (as played in G.I. Joe: A Real American Hero). But this time Cobra has unlocked the secret of Atlantis. Using an ancient power source Cobra has managed to raise Atlantis out of the bottom of the ocean and now is rebuilding his forces set to destroy the world. It is up to General Hawk and his friends, all part of the Joe Team, to save the day again.

G.I. Joe: The Atlantis Factor is a side-scrolling platform game where the objective is to get General Hawk and/or his friends to make there way though the missions to end up at Cobras headquarters. There are 3 paths to take though the 22 levels (plus some shortcuts) that split and merge at decision points and it also allows the player to backtrack and take a new path. The levels vary from a simple get to the end to mazes to find these items type levels, also with the odd boss fight.

The game starts of as playing General Hawk, the main character, however as the player completes levels they unlock new characters. These new characters, all with the there own strengths and weaknesses (like how high they can jump and hit points) and special abilities. These characters can be picked at the start each new level. The characters are General Hawk (main character), Wet Suit (can dive under water), Storm Shadow (close combat), Road Block (cruel though narrow passages), Duke (fire gun in any direction), and Snake Eyes (close combat). There are also non playable characters that can help the chosen character that are also unlocked after completing certain levels like Stalker (informant), Big Bear (heals during battle), Spirit (heals out side of battle), and Gung-Ho (gives ammo when running low).

The player gets two weapons to start with and there are three more to collect after completing certain missions. The weapons are Punches (sword for Storm Shadow and Snake Eyes), Machine Gun (starting weapon), Pulse Rifle, Laser Rifle, and Rocket Launcher. When a weapon is collected any character can use it. Each weapon has 4 different power levels that can be obtained by collecting a few Pow pickups from fallen enemies or completing certain levels. Each character must level up there weapons individually.

Password save is available using a letters/numbers in a grid system.