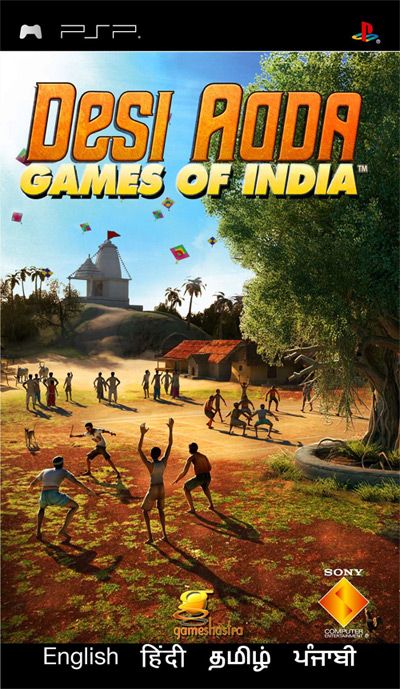 You play the part of Avinash, son of an NRI businessman, who comes to visit his ancestral village. Since Avinash has lived all his life abroad, and this is his first visit to an Indian village, he is fascinated by what he sees. The story unfolds as he roams around the village, plays the different village games, and meets Gowri and Gopal, a couple who are in love, but cannot get married as the girl's father is opposed to their match. Avinash must now seek the different people in the village, who play a part in this story one way or the other, and try to find a way to get the girl's father to agree to their wedding.

Pachisi. is a turn based board game played using the cross shaped board and two rectangular dice. It?s a game of change and strategy. Pachisi game played between the Pandavas and Kauravas is the significant event in the great epic of Mahabharata

Aadu Puli Aatam(Goat & the tiger)- This is a hunt game and game between the extravagant Tigers and the deceitful goats. The general rule of this interesting strategy game is the number of tigers varies from 1 to 4, and the number of goats from 11 to 12 to 23 or 24. The general aim is to hem in the tigers so that they cannot move, but the arrangement of pieces, the method of play and the rules of capture vary from game to game.

Kite fight-In India people fly kites to cut other kites. Specially made threads, mostly coated with fine powdered glass, are used for the kite fight. Kites are made from colored paper and are available in various shapes. Two bamboo sticks called "tuddah" (which is straight) and "Kaamp" which is arched, hold the paper together. The string attached determines the performance of the kite.
Kabaddi- two teams compete with each other for higher scores, by touching or capturing the players of the opponent team. Each team consists of 12 players, of which seven are on court at a time, and five in reserve. The two teams fight for higher scores, alternating defence and offense.

Gilli Danda is a game like cricket or baseball but without a ball and with a different set of rules. The ball is replaced by a small stick called Gilli. The Gilli 3 to 4 inches long and both the ends are tapered. Danda is a 24 inches long cylindrical stick used like a bat. Player can enjoy batting the Gilli or fielding among the free cattle.