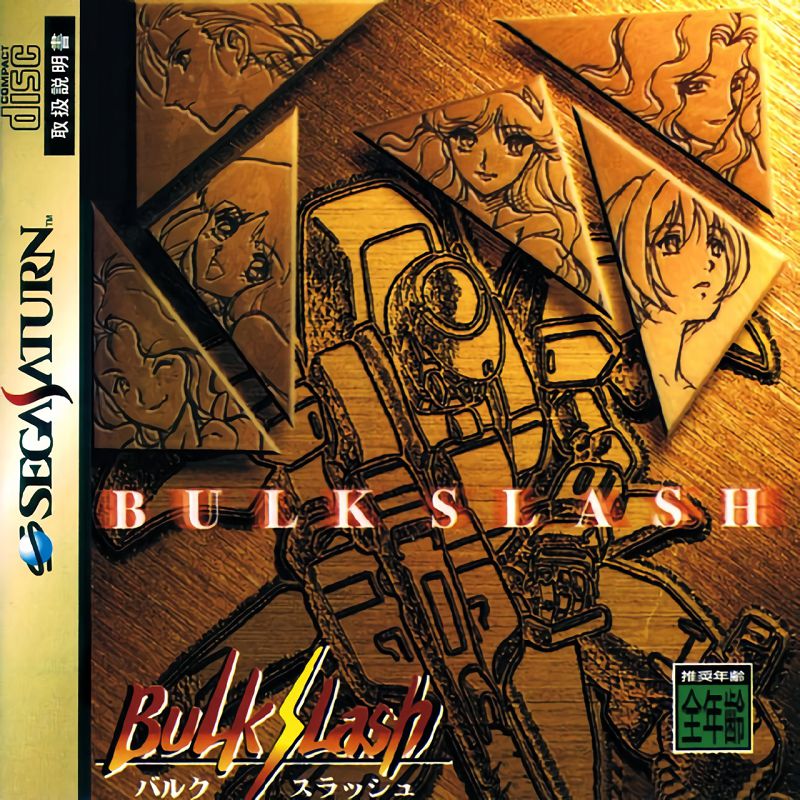 Bulk Slash is like a cross between Virtual On and Burning Rangers, with simple controls and an instantaneous mecha-transformation mechanic. It’s much simpler than either of those two though, playing more like a traditional arcade action title. There’s barely even a story… After the great galactic war ends, the planet Blau and its citizens are oppressed and discriminated against by the victors. Former military chief Alois Gardona enacts a coup d’état, to bring Blau back to power, and so a coalition of planets is rallied to put a stop to them. No prizes for guessing which real-world early 20th century events this seems to be copying… As the game’s protagonist you are an S.D.F. pilot who must single-handedly win the war.

You can switch between controlling a walking robot or jetfighter at will, as many times as you like. As the robot you can jump and shoot, and when close to an enemy you can attack with a laser sword. When not attacking a little bar charges up and, when nearly full, allows you to lob a powerful bomb with wide blast radius. There are also three varieties of power-up with finite ammo: Flame Blaster, which is like a devastating flamethrower; Bezier Blaster, a kind of homing laser; and Napalm Blaster, which shoots out little energy spheres and isn’t particularly useful.

It’s not a complicated system – certainly it’s nothing like Virtual On, or any of the Armored Core games by From Software. Rather, Bulk Slash isn’t so much a mecha game, rather an action game that happens to have mecha in it.. Adding some needed depth is the Manageable Intelligent Support System (aka M.I.S.S.), which is a fancy way of describing your navigators. There are seven in total, one for each planet in the game, and it adds a kind of pseudo dating-sim element to proceedings. If you can find their icon in the playfield, a little pink helmet with M.I.S.S. above it, you can choose to bring that navigator along for the ride. She’ll scream out when you take damage or grab power-ups, and will describe where your next goal is in relation to your current position. In this way it feels a lot like Burning Rangers, with an audio instruction telling you where to go. According to an online guide, each navigator provides some kind of ability bonus. Having tested six of the seven however, none of them seemed to do anything special. They level up through usage though, so it’s possible their attributes only become noticeable at higher levels.

This is where the so-called “dating-sim” aspect comes in. Each girl gains experience through usage, which affects their ending and the bonus art unlocked after the game’s completion. The idea is that you’ll play through the game repeatedly with your favorite navigator, raising her affinity for you to the maximum Level 3, unlocking all the artwork, and enjoying the bonus ending after the regular one. For navigators who can only be recruited in later levels, such as Karen Steiner, you need to finish the game with them and then restart

mtsu reacted to this