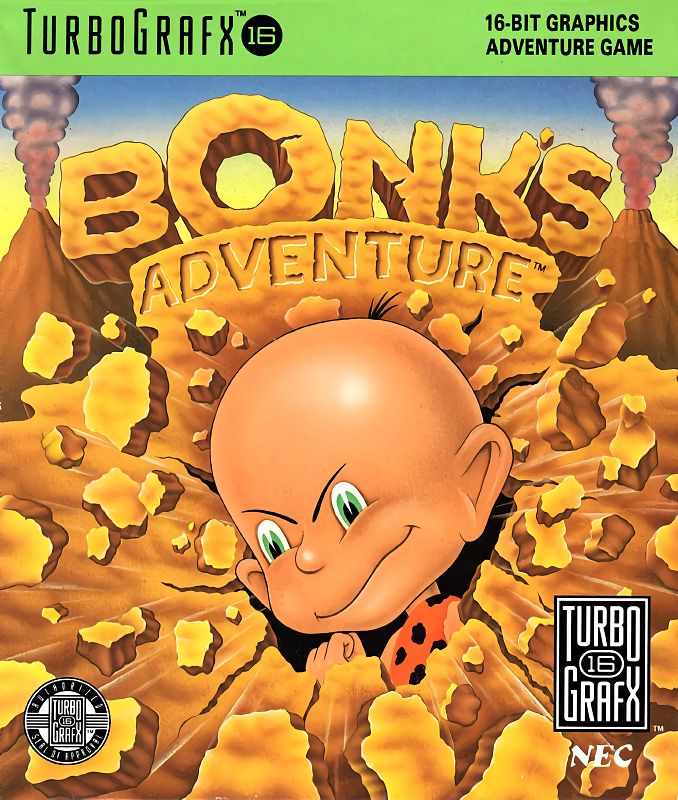 By TompouceGabriel : July 9, 2019
Bonk's Adventure is a prehistoric platform game where you are in control of a large bald headed caveman, guiding him through the levels taking out all manner of strange prehistoric creatures that get in your way including King Drools henchmen - all in effort to free the captured/controlled residents of Moonland (bosses) - including the Princess Za from King Drool attempted take over.

The game is not unlike other platform games of the era. Though it's unique in that you can climb walls and swing on rope with your teeth and your only method of attack is head butting enemies - straight forward or dive bomb style. The game starts off with simplistic point A to point B style, but focuses more on exploration in the later stages, which include finding hidden bonus areas.

The game is also known for its trademark gameplay mechanism of 'spin attack', where Bonk floats through the air if you have the turbo button on. This can be used to float around the level and reach areas for extra/hidden items, but also as a method of attack as well. The game starts you off with 3 hearts, but allows you to increase this number when you find special heart container items, allowing Bonk to take a number of hits before dying.

A variety of bonus stages can be found throughout the game, which provide bonus points upon completion and thus resulting in accumulating extra lives. Enemies themselves can be 'milked' for points in that you can keep 'bonking' their dead bodies and not letting them hit the ground. Spin attack is another method for doing this.

Thanks to Kana for this translation.