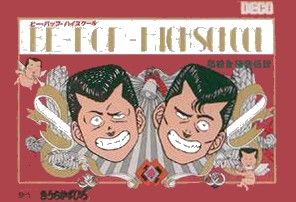 By TompouceGabriel : March 23, 2016
Be-Bop High School: Koukousei Gokuraku Densetsu is an adventure game developed and published by Data East for the Famicom in 1988. It is based on a manga series known as Be-Bop High School which began publication in 1983. The story revolves around the lives of two rough-and-tumble high school friends, Kato Hiroshi and Nakama Toru, who frequently cause trouble and start fights. In keeping with the spirit of the manga, Toru and Hiroshi style their hair in slicked back pompadours and also adopt exaggerated swaggering gaits. The manga also features an assortment of outlandish character who also sport unusual fashions and hairdos. This video game is a text-heavy adventure in which the player controls a gang of high school boys. It was only released in Japan, and has never been translated from the original Japanese language.