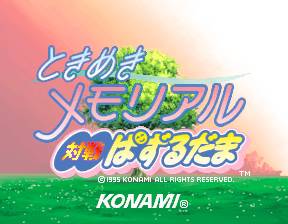 
'Coins' drop in sets of two's from the top of the screen and players must form chains of three or more same colored coins to make them disappear. Clearing multiple chains at a time sends locked coins to the other side. These locked coins are enclosed in clear spheres which are removed when a nearby coin is cleared from the screen. This can set off more chains which adds to the strategy of the game.


If the coins get stacked up to the top of the screen then the player loses the game. Upon continuing the player will restart the same match.