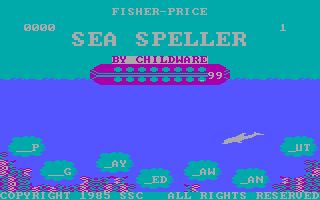 By RomStation : January 3, 2020
In Sea Speller the player controls a dolphin whose task is to help a submarine reach the ocean floor before it runs out of air. This is done by picking up "letter sponges" scattered along the bottom of the sea, and matching them with the signs on the sub's billboard to create words. Every complete word fires up another light on the submarine, and once they're all lit up, it descends to deeper waters for the next level - which ups the difficulty with longer words.

The quicker you are, the higher the score - if the sub reaches the bottom with air left over, a bonus is awarded; you can save time by using a single letter combination to create more than one word. Certain "magic words" (all related to the sea) will automatically send you to the next level to really speed things along. In addition to the single-player mode, two players can play cooperatively (for a shared score) by taking turns.