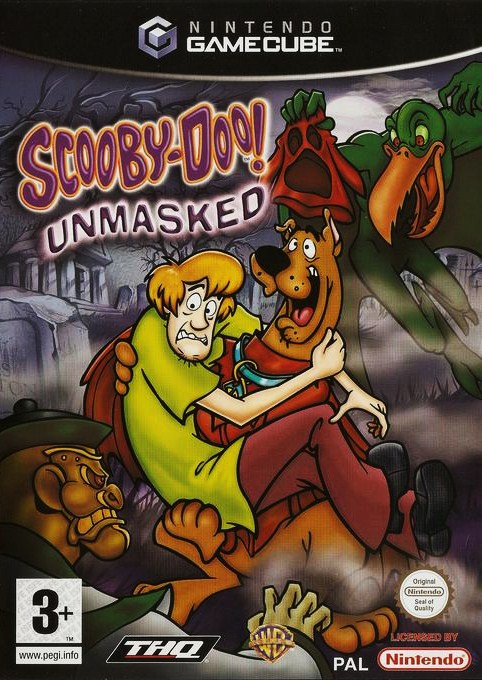 Fred brings the rest of Mystery, Inc. along to meet his cousin, Jed, who works at the Monstrous Fright & Magic. MFM is a special effects company that creates monster costumes with a special formula they invented called, “Mubber”, that makes the costumes seems so real that the wearer literally becomes the actual monster. When they arrive, they found the location in shambles. Winslow Stanton, the creator of Mubber and owner of MFM, told them someone has stolen the Mubber formula and by using it with their animatrons, destroyed the building and disappeared. He believes it is Jed’s doing because he, too, disappeared. Looks like it’s up to Scooby and the gang to find Jed, destroy the costumed monsters and unmask the truth behind this great mystery!

In Scooby-Doo! Unmasked, you will guide Scooby to help Mystery, Inc. uncover clues, fight monsters and occasionally save your friends from danger. You will be visiting many several worlds including a China Town and a museum. You will encounter various monsters like the Chinese Zombie and the Black Knight and the only way to get past them is by attacking them with your spin, slide, roll and smash attacks! Also, by collecting mubbers, you can create special costumes that will give you special powers. For example, with the Kung Fu Costume, you will be able to move around with greater agility and force. Be sure to watch your health level which is indicated by the number of Scooby Medals you have. If you reach zero, you will restart at the last save point but you can restore your health by collecting enough Scooby snacks that can be found throughout the game. Also, by collecting food items you can get Shaggy to cook you a special meal that will increase the total number of medals you have.

In each world, when you’ve collected enough clues, Velma will ask you a few questions in order to figure out who is behind everything, and you must select the clues that you feel will answer these questions. When that’s completed, you will have to fight a boss before Velma will reveal who the identity of the villain.

Scooby-Doo! Unmasked can be saved at any point in the game simply by selecting Save Game in the Pause Menu. You can also turn on the Autosave function which will enable the game to automatically save at different points. You can replay any level as many times as you want so you can collect any missing items you still lack. In the extra menu, you will find Bonus Arts that features various conceptual art pieces used in the making of the game.