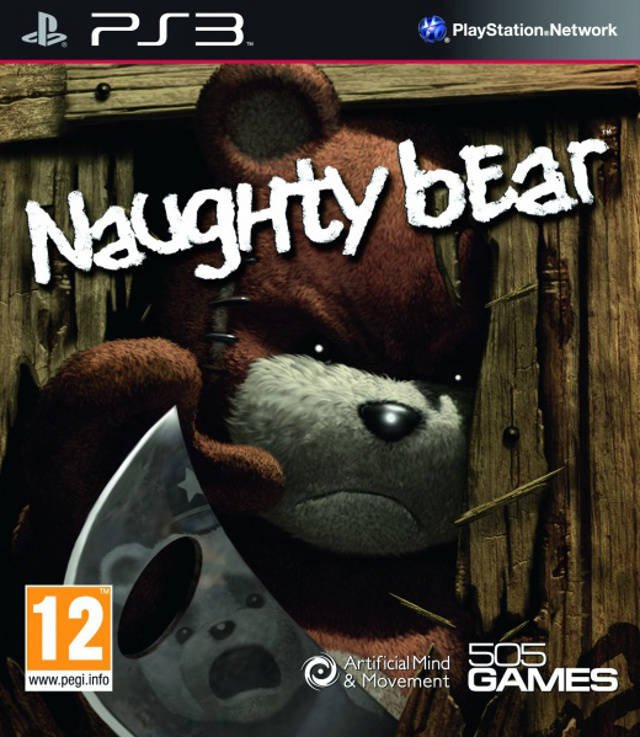 Naughty Bear is a third-person action game with a theme similar to Happy Tree Friends or Conker's Bad Fur Day, where cute, plushy animals act more violently than they usually do - mixing dark humour with over-the-top violence. Players control the eponymous bear to gain as many points as possible by doing naughty things, generally a euphemism for killing other animals and destroying their possessions. The game is set on Perfection Island where teddy bears live happily. Naughty is somewhat of an outsider because of his demeanour and he is the only one not invited to the birthday party of Daddles. He tries to go anyway, crafting a present for the occasion, but his gift is ridiculed by two other bears, Chubby and Giggles, and he sulkily goes back home, plotting for revenge.

The game takes place over the course of seven episodes, further divided into separate missions. Every mission has several quests to be completed, such as killing a specific bear, beating the time limit, collecting gifts, or staying undetected (Naughty Bear can hold a branch with leafs in front of his face to hide). Completing these assignments and killing other bears is rewarded with points, which opens up bridges or gates to go to new areas. That way in-game trophies (bronze, silver, gold) can be gathered, based on the amount of points, to open up new levels and unlock additional costumes, improved abilities, and badges. If the naughtiness goes on uninterruptedly, a multiplier is built up. Each chapter is a separate story slice, showing how Naughty Bear is spied on by birds, or is not invited to a cookery lesson.

Naughty Bear attacks with knives, golf clubs, legs of meat, machetes and guns - infiltrating cabins, running through the woods, and hacking away at everything he encounters. These weapons can be picked up in the levels and there is also the option to set traps and use contextual weapons involving car doors for instance, or sabotaging phone lines and escape vehicles. That way it is also possible to use a more tactical approach: sneaking around, remaining undetected and luring the other bears in your direction by sabotaging their everyday items. Chasing them is sometimes more difficult as they can warn the others or barricade themselves in their houses. Every weapon has a finishing move that can be used when another bear is hurt, shown as a short animation. There are regular bears, but later levels introduce more difficult ninja, zombie, cop, and alien bears. One button is used to hit and tapping it repeatedly forms a combo. Naughty Bear can also dodge, and use a scare attack. By torturing and haunting others repeatedly, bears can even go suicidal and start beating themselves. Most items can be smashed or destroyed by throwing them into a toilet for instance.

Multiplayer is supported with four different modes. Along with basic deathmatch (Assault), there is Cakewalk (hold on to a golden cake as long as possible), Golden Oozy (get control of a powerful gun), and Jelly Wars (collect jellies faster than the opponents).