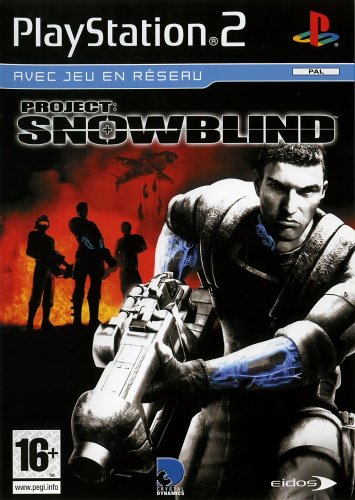 By CarterDrake : September 8
Players take the role of a futuristic super soldier to battle the forces of an oppressive regime in this original cross-platform shooter by Eidos' mainstay studio Crystal Dynamics. Set about 60 years in the future, the game follows the heavily-armed adventures of Lt. Nathan Frost, who began as just another infantry soldier in the internationally sponsored Liberty Coalition. When a battlefield explosion nearly kills him, Frost's body is rebuilt through a highly experimental procedure. He survives, and comes away stronger, faster, and better than before, enhanced with the potential for a number of superhuman powers and abilities. He is soon sent back into action, where he can put these special augmentations to good use.

Initially conceived as a new game set in the Deus Ex universe, Project: Snowblind was developed to combine the frontline, first-person action brought out in contemporary World War II-based shooters with the non-linear setting of a science fiction adventure. The game eventually developed an identity all its own, however, and plays out in a near-future setting where a wide variety of imaginative weapons may be mastered, and a selection of high-tech vehicles are available for both transportation and assault runs. The single-player game spans 11 multi-part missions set in 16 different locations, including repurposed theaters, abandoned temples, and a large, urban wasteland. A number of online multiplayer modes are supported for Internet-connected gamers.

Use the Software mode to avoid graphic problems.