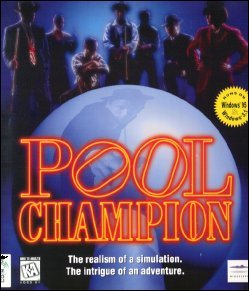 By RomStation : January 27
"The realism of a simulation. The intrigue of an adventure." Players play the game of pool against the computer, against another player, or practice by themselves. Players may also embark upon the "Great American Pool Adventure." In the adventure, players play against and wager with a series of increasingly difficult pool opponents with the goal of eventually earning enough money to go to Las Vegas and win the National Pool Championship.