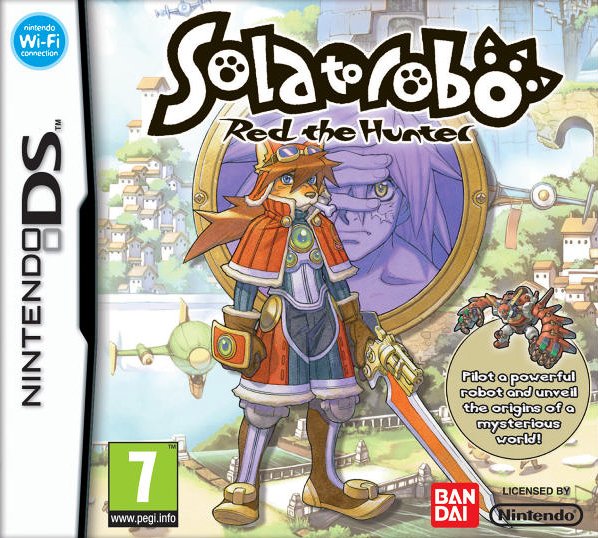 In a world filled with robots, giant hermit crabs, and kitten pirates, everyone has jobs they need done. That is where hunters come in; picking up trash, organizing warehouses, and defeating mercenary armies, for a price. One hunter, Red, was following up a tip on a valuable piece of jewelry when he ran afoul of the Kurvaz gang. He was able to locate the jewelry, but just got himself into more trouble when he apparently unleashed a gargantuan monster into the world. Now he, his sister Chocolat, and the youth with a mysterious past, Elh, must travel around the floating islands of the Shepard Republic looking for some way to stop the monster and stay one step ahead of the Kurvaz.

Solatorobo is a sequel to Tail Concerto, sharing the same whimsical theme but taking place in a new country. Red's Robo, the Dahak, can lift almost anything, and that is also the machine's only form of offense. After picking up an enemy they can be thrown to deal damage, and then grabbed in the air again to do a combo. Large projectiles like missiles can also be grabbed with proper timing. Red can exit the Dahak in towns or dungeons to enter shops, talk to people, or pick up items. The Dahak can be upgraded to have more defense, speed, or attack power with parts that are fit into its core.

Solatorobo follows a linear story that takes Red from island to island around the kingdom. Each chapter new optional missions open at the mission broker on the islands, and they can be completed for additional money and upgrades to Red's Hunter Rank. One side mission is a 3D race where Red flies against three other pilots, or against the clock, in a closed aerial track. This mission type can also be played in multiplayer, and playing more race missions in single player opens up more air-frames for multiplayer mode.