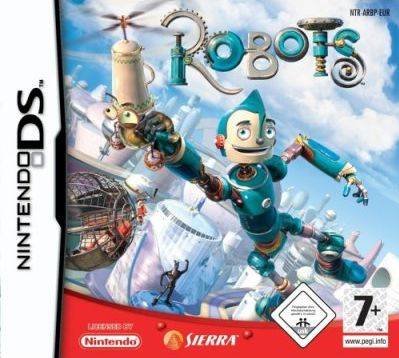 By Jobard : July 9
Based on the Blue Sky film (distributed by Fox) of the same name, Robots takes players on an adventure to save Robot city. When Rodney Copperbottom travels to Robot City to meet Big Weld, the famous inventor, he finds that something is wrong. Big Weld is missing and the evil Ratchet has taken over Big Weld Industries. With the help of his friends the Rusties, Rodney puts an end to Ratchet's villainous ways and restores order to the city.

Robots uses a unique perspective that combines 2D side-scrolling with 3D views. The game takes the player to locations from the movie like Robot City, Big Weld's Mansion, the Outmode, and Madame Gasket's Chop Shop. Using the invention mode, players build and upgrade Rodney's weapons including the wrench, scrap gun, electro zapper, and magno grenade. With a combination of navigation, jumping, and combat skills, players can make their way though the world of Robots and bring an end to Ratchet's tyranny.

In addition to the main story line, players will find robots in need all over the city. The parts these poor robots are missing can be found hidden in the numerous maps and returning the correct part rewards the player with power-ups and weapon upgrades. All of the maps are interconnected, so players can easily find their way back to a previous area to uncover additional secrets.The maps are connected with a transit ball mini-game, just like the transit system in the movie.

The DS version of the game features a map that can be annotated by the player, a unique 3D version of the transit ball game that utilizes the stylus for control, and 3D menus. In addition to the new features, the DS also includes high resolution maps that include more detail than the GBA version.