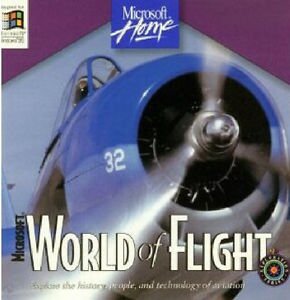 By RomStation : January 27
Take to the skies with Microsoft World of Flight, which is yet another in the Microsoft Home exploration series. Learn all about the creation, uses, design, and impact aircraft have had on our world and about the people associated with them. This information is accompanied by a wealth of pictures, film clips and animations. You can even pick one of many colorful characters to take you on a narrated tour which explore aspects of flight and aircraft. You can also take quizzes and even install screen savers which will turn your computer into a virtual air show. All of this on just one CD-ROM which is just an impressive virtual museum of man's accomplishments in being able to take to the skies.