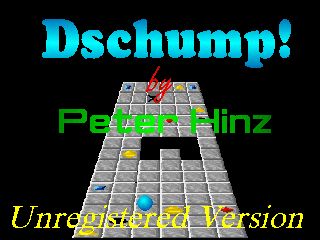 By RomStation : January 3
Nice and little-known shareware-game in which you have to manage from the top view a light blue jumping ball.

The task at each level (for the passage of which, by the way, quite a lot of attempts are given, and each new one takes into account your previous achievements within a particular game) - jump over a certain size of the territory, resembling tracks of slabs of varying degrees of width, hanging in space, as well as assemble can be more red star bonuses. The matter is facilitated by the fact that there is a level map on the right side of the screen, but it is complicated by the fact that you don’t see a lot of space in the screen itself, so you can easily find yourself in front of a very narrow path and just crash when falling into the abyss of space. ..