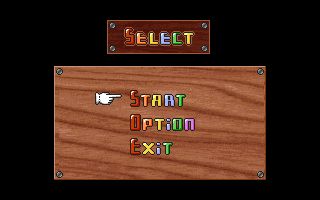 By RomStation : January 3
Dokkaebi-ga Ganda is a Korean-made colorful platform game. The player can choose to control either of the two little kobold protagonists, a boy and a girl named Cobi and Comi, respectively. Cobi is armed with a club, while Comi fights using a hammer. Both characters, however, control identically and can execute special combo moves by inputting combinations of keys.The gameplay consists of traversing linearly arranged stages divided into themes (forest, cave, village, etc.); each thematic group contains three stages, the last of which is a boss battle. Enemies often attack in groups and may charge at the protagonist and push him or her off platforms. Most of the items the player character can collect (coins, sushi, blue energy flames left by defeated enemies, etc.) have no effect on the gameplay and serve only to increase the score. Rice bowls, however, replenish a portion of the protagonist's health bar; a large bowl refills it completely. The player character's overall health is measured by hearts; dying will permanently reduce it by one. There are three difficulty levels in the game, and the player can also choose the amount of continues, from zero to seven.