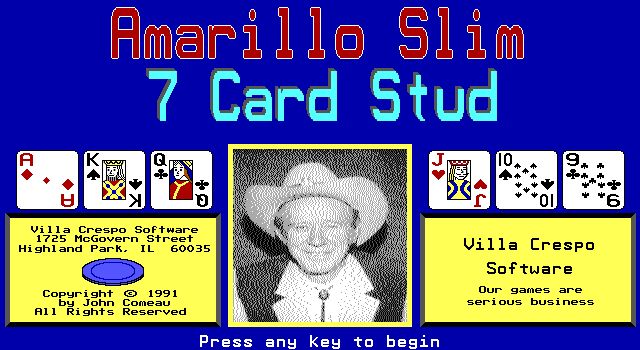 By RomStation : January 3, 2020
Amarillo Slim's 7 Card Stud is an abridged version of Amarillo Slim Dealer's Choice, published as the first volume of the popular and casual Coffee Break series. The game is a poker simulation featuring only one kind of variety: 7 Card Stud. You can play against two to seven computer opponents chosen out of fifteen different personalities and even with digitized voices. As well as other CBS titles, Amarillo Slim's 7 Card Stud features easy to use mouse or keyboard interface and complete on-line help, with the optional tutor giving you advice on every move, displaying statistics, calculating odds of winning with your current hand, save/load feature, and high score table.