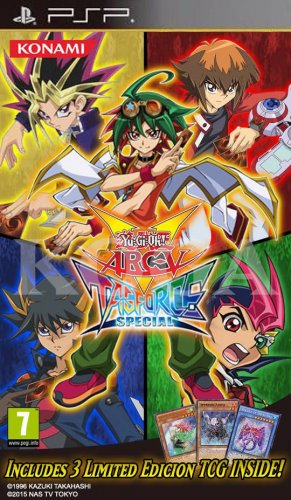 Still popular in Japan, the PSP will be entitled to a beautiful new production this winter, taken from a successful license: Yu-Gi-Oh! Arc-V: Tag Force Special. Its particularity will be to combine in the same game the cards and the heroes of the five universes that the series has known since its launch, including the very recent Arc-V, which gives the game its name.

The protagonists of each of these worlds will therefore be brought together to compete in duels where more than 7000 cards can be used, those of the OCG The Secret of Evolution expansion next November even having to be implemented. The very recent Pendulum summon mechanic will also be part of the game, for an opus more advanced than ever. Note that the experience will also be playable from the PSVita, to the delight of those who have already abandoned their good old PSP.