Ys - The Oath In Felghana 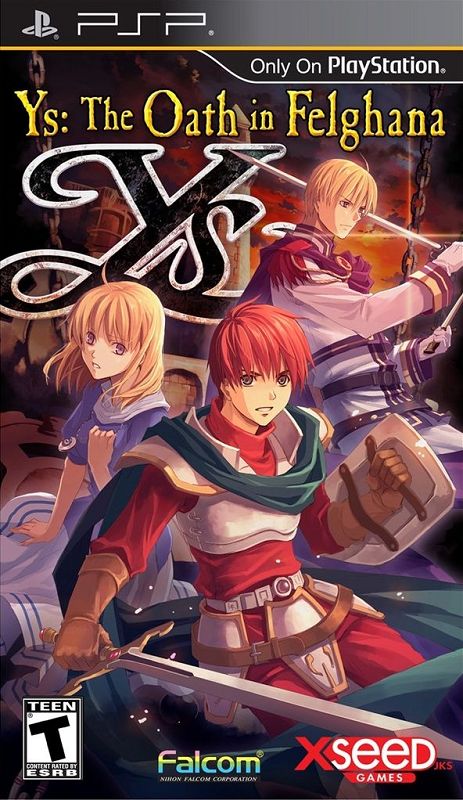 Ys: The Oath in Felghana is an action role-playing game in the long-lasting Ys series. It is a heavily re-imagined remake of Ys III: Wanderers from Ys. Adol Christin and his friend Dogi are travelling to Dogi's hometown of Redmont three years after the events of the first two games. Upon arriving, they discover that evil happenings are threatening the townspeople, and it is up to Adol to put a stop to it.

The basic plot has been slightly modified from the original, and expanded through the use of additional scenes. The side-scrolling game engine from the original Ys III has been discarded, and replaced with a 3D engine based on the one used in Ys VI: The Ark of Napishtim. Locations have been expanded as well and are more complex than in the earlier version, with more branching paths.

The gameplay has undergone some changes as well. Adol can perform chain attacks, which grant bonus experience when executed correctly. Vanquishing multiple enemies in a short time results in temporary attack speed boost. Adol cannot stock healing items, but enemies may drop objects that instantly restore a portion of Adol's HP or temporarily increase his attributes. Instead of the five special rings of the original, the remake features three magic bracelets, each with its own function: the Fire Bracelet allows the protagonist to light torches and melt ice, the Wind Bracelet enhanced his jumping abilities, and the Earth Bracelet makes it possible to break walls and other barriers.

Weapons and armor can be upgraded by collecting special crystals and offering them to the town blacksmith. There are new side quests, optional areas and new items. There is an additional Easy difficulty modes, as well as the unlockable Hard and Nightmare modes. The Time Attack mode allows the player to fight the game's boss enemies consecutively.