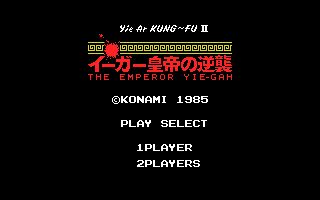 By RomStation : January 3
A sequel to Yie Ar Kung-Fu, ported to DOS from MSX long after release by Friends Software. Konami concocted a sequel to their fighting game in record time - it was released the same year as the original. The haste did not pay off since the quality was predictably low.