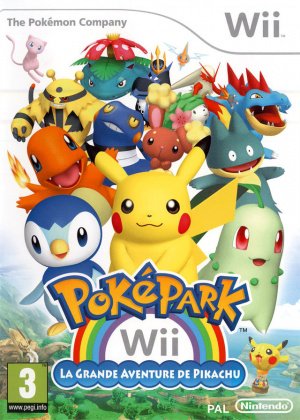 Take control of Pikachu and explore PokéPark, an amusement park for Pokémon. Battle Charizard, race Bulbasaur, and explore the world of Pokémon!

Mew tells a Pikachu of a crisis taking place in PokéPark, a special nature preserve and amusement park for Pokémon. The Pokémon don't get along anymore, somehow meaning that a giant crystal in the sky will fall and destroy the world. After being teleported, this Pikachu explores the park, which is covered in forests, mountains, has beautiful beaches, and is filled with Pokémon. His mission is to solve the crisis and collecte shards that have fallen from the sky.

You control Pikachu and use the Wiimote horizontally to play. You move by using the dire4ctional pad while the other buttons serve to jumps or attack. Pikachu's attacks include Thunderbolt, Quick Attack, and Iron Tail. Pikachu can make friends with other Pokémon and use their abilities to compete at various attractions in PokéPark.

During your adventure, you'll come across 193 Pokémon. These Pokémon can become your allies, all you have to do is complete simple tasks for them, such as playing hide and seek, doing a race, a quiz or challenging them in a battle.

Your main goal is to open up the different rides in the park, that've been closed down by different chiefs. To convince them to open these rides again, you must complete different events at which point you must choose from your Pokémon friends list and complete the event, that can consist of running, jumping or shooting.