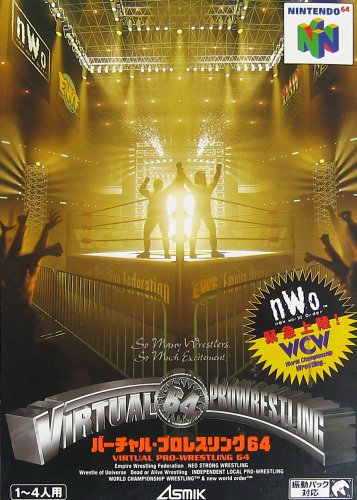 Although released less than a month after its American counterpart, Virtual Pro Wrestling 64 has various distinctions from and additions to World Tour. For example, most wrestlers sport their actual attires but occasionally they may contain color alterations as is the case with Hulk Hogan's famous yellow tights and red knee pads which are replaced with yellow tights and black knee pads and with Chris Benoit, who sports his Japanese attires as opposed to his Four Horsemen attire which he wears in World Tour. Along with other sporadic attire color coordination changes, some wrestler's actual movesets are sometimes altered as well. For instance, with Chris Benoit's Front Special move, he performs a double German suplex which is entirely absent from World Tour and Diamond Dallas Page, who needs not be unlocked as required World Tour (along with Randy Savage), performs his signature Diamond Cutter simply as a strong grapple move and instead has a T-bone suplex for his front Special. Other unlockable wrestlers in World Tour that are entirely absent from VPW 64, include Glacier and Wrath.

Notably, VPW 64 also includes a post-match scoring system as well as the ability to edit wrestlers' attire. These features would not be introduced to American gamers until WCW/nWo Revenge in 1998.