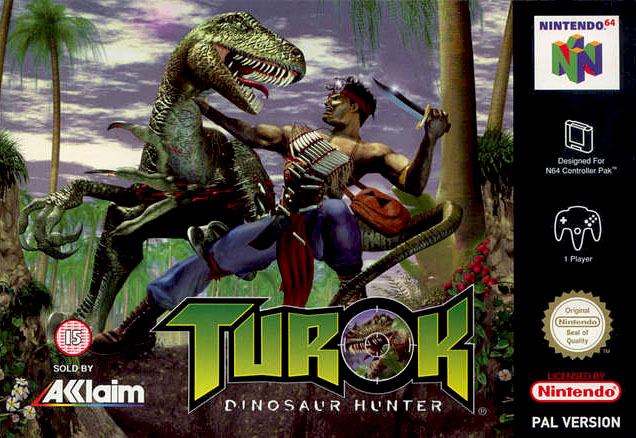 The Earth is separated by an invisible barrier from the Lost Land, a realm in which time has no meaning, and which is inhabited by ferocious dinosaurs and aliens. For many generations, the mantle of Turok has been bestowed upon those who saw the protection of the barrier as their sacred duty. But an evil lord named Campaigner is seeking for an artifact that is capable of destroying the barrier, striving to dominate the entire universe. This artifact, known as the Chronoscepter, was broken into pieces which were then hidden away. Tal'Set, a Native American and the last Turok, must find the scattered pieces of the Chronoscepter, and stop the Campaigner from obtaining them.

Turok: Dinosaur Hunter is a first-person shooter with platforming and light puzzle-solving elements. Much of the game is set in outdoor environments, and requires the player to explore them by finding various paths, jumping, swimming, and climbing. The game's most notable enemies are dinosaurs of various sizes, though the levels also include human and demonic enemies, as well as wildlife. The player gradually gains access to thirteen weapons (plus the Chronoscepter, assembling which is the game's main objective); these include a knife, a bow, as well as high-tech firearms such as a rocket launcher and an atomic fusion cannon.