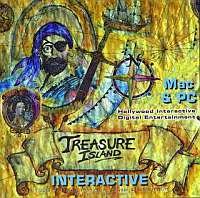 The famous story of Robert Louis Stevenson's Treasure Island contains pirates, buried treasures and high sea adventures. With narration and live video, children can interact with the characters and participate in the adventures. There's very little actual game afoot here - the entire story plays out in badly-animated CG clips of a talking skull, except when he's a live-action badly-synched talking skull. There's audio narration over still images and low-budget full motion video clips with the dialogue dubbed in later. In many of the live-action sequences, it appears that the acquired footage was damaged, or the script was changed, or (most likely) there just wasn't enough footage to cover the dialogue. So much of the story is told using still frames or repeated clips to support the post-dubbed dialogue. Oh, the drama! The low-budget production values! The cheesy video effects!
NaoKoSinX reacted to this