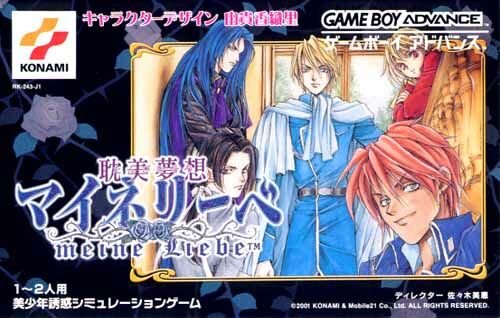 By Nanoman : May 2
Tanbi Musou Meine Liebe is a GameBoy Advance love simulation game for 1 to 2 players released on April 26, 2001 in Japan by Konami. With character designs by Kaori Yuki, it ended up spawning two anime series, a manga series by Izawa Rei, two PS2 'sequels' and a bunch of CDs. ^_^

The setting of the this game is in the 1930s (specifically 1935-1937) and takes place in the fictional Kuchen Kingdom (probably modeled after Austria), a nation made unstable by the war that is drawing ever so closer to it. Rosenstolz Academy, the school where all of the action in the game occurs, has a dormitory system for its students. Only pupils that come from good family backgrounds and possess extraordinary talent can attend it's campus. Among them are chosen male students with particular skill that become 'Strahl' and undergo education that will prepare them to be future prospects for sustaining the country.

You play a 'nameless' blonde heroine who enters the academy as one of the students. Your job in the two years you spend in there is to tempt the six possible love interests (the five Strahl + one more) by going on dates with them when you can, balancing that with getting good grades in your classes in Rosenstolz. The aim of the game is to get them to confess their feelings to you during the dance party celebrating your graduation.

Now, to add to all that, you have three female 'friends' in the academy. They also serve as your love rivals for the guys and can really be a pain, especially when you have to be on good terms with them too in order to beat the game. That means not only do you have to go out on dates with the guy of your choice, you must also go out with them too. Let's just say, if you don't do that, you get 'bombed' by the results.