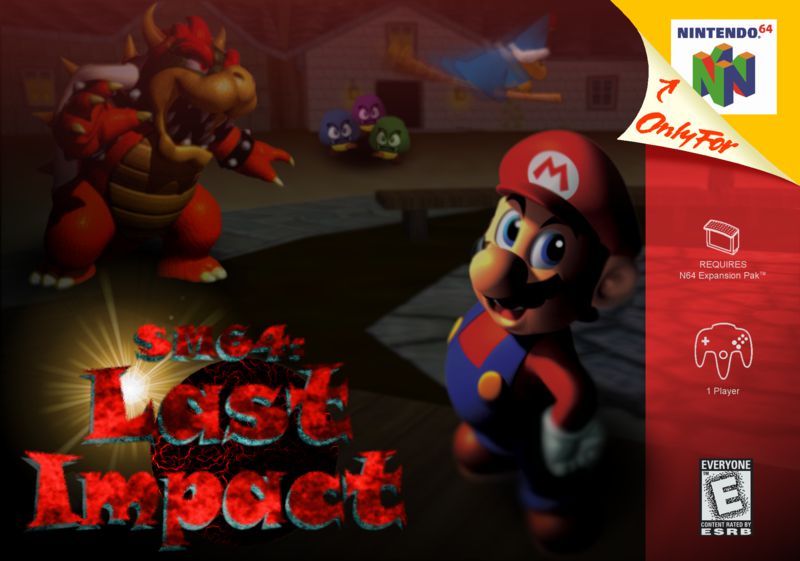 Super Mario 64: Last Impact is a major hack made by Kaze Emanuar. It was released on September 30th, 2016 at 8:00AM MDT. It contains 130 stars, 12 power-ups, many new bosses and a large variety of completely new levels. In SM64 Last Impact, Mario only has 6 health instead of the normal 8 and a separate gauge for air underwater. This hack presents many things that weren't in previous hacks or the original game, including new power-ups, custom music and objects, and unique boss fights.

The game starts out with two tiny meteors crashing down and becoming Prickly Piranha Plants that threaten Princess Peach, Mario goes over to defeat them, then princess peach warns Mario of danger coming and the moon.

From here Mario collects stars in various worlds, unlocking more with the number of stars he collects, and he eventually defeats Bowser.

Still worried about the moon, he continues collecting stars, with the next objective being to get into the Shadow Factory, after he collects enough, colored goombas appear to fight him and are defeated.

He continues on, collecting more stars, and eventually, Rashay appears, revealing himself as the problem on the moon, and kidnaps Princess Peach, he then escapes, as the colored goombas appear again, much stronger this time, and Mario once again defeats them.

With rescuing Princess Peach and stopping Rashay now being the objective, Mario continues onward into the Shadow Factory, fights Shadow Mario, and then uses the key he obtains to reach the rocket ship, which he uses to go to the moon.

Mario must collect many more stars, and after reaching eighty, he gains access to Rashay's Moon Cellar, where, with the help of the colored goombas, he defeats Rashay and rescues princess peach, and they all have dinner outside of Peach's Castle.

In Project64, click on "Options" and then "Settings" in the "Options" tab. Uncheck the "Hide advanced settings" check box.