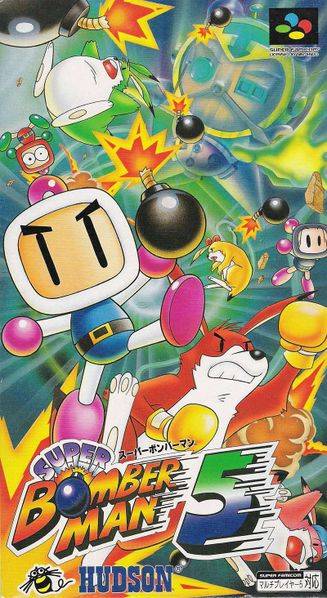 An evil Bomber named Emperor Terrorin who has the power of Time itself has freed various criminal Bombers from their prison cells in orbit around Planet Bomber. Setting them up in a warped time and space, Shirobon, Kurobon, and their Louie (Rui) companions must travel through stages and defeat them before going up against Emperor Terrorin himself.

In multiplayer mode there are nine characters to choose from, and over 10 maps to play on (though the extra three maps in the gold version can be unlocked in the normal cart as well). A create-a-character mode, which is unique to Super Bomberman 5, lets players choose their character and color and allows them a number of points. These points can be used to equip the power-up items from the single-player game. If you enter in password menu (Options ? Password) 0413, the maps in battle mode will change. There are also 10 playable characters in Battle Mode, nine of which are bosses in Normal Mode.

OrageSpark and Ruto reacted to this