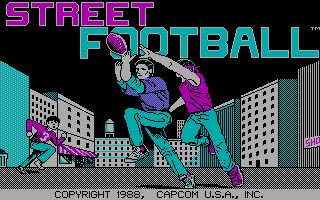 By RomStation : January 3
Street Football is a game that allows you to play three-on-three American Football in the street against an other player or the arcade in a isometric view with part of the street shown. You have to score more points in six minutes than your opponent. You play as blue and your opponent red. The kick-off has the red team kick to the blue team and before the kick you can choose which player to control. The player with the ball can now run with it using a trackball or throw it to the flashing player. You hold down the button and release when a height bar on the right or left is at the level you require and you let go.