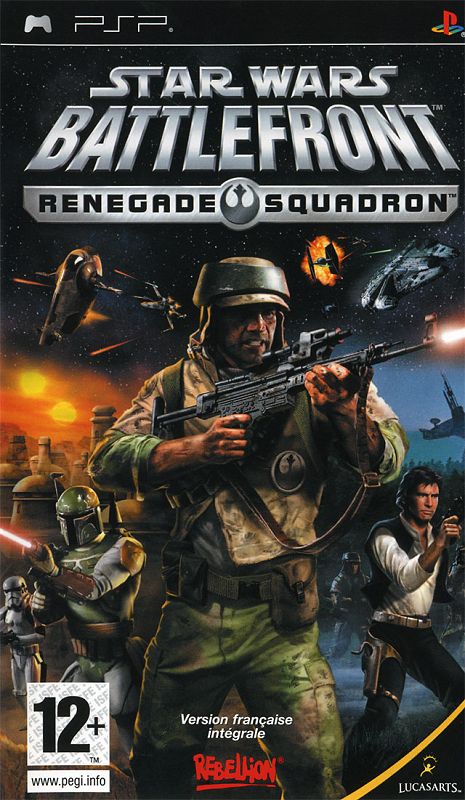 Star Wars Battlefront: Renegade Squadron is a continuation of the Battlefront series and an exclusive for the PSP. Once again the player takes command of either The Rebellion, The Galactic Empire, The Republic Clone Army and The CIS Droid Army, with a variety of heroes for each side such as Yoda, Obi-Wan Kenobi, Han Solo as well as villains like Boba Fett, Darth Maul and Darth Vader among many others.

It features the same modes as in its predecessors: Galactic Conquest where the player chooses which team they want to play as, fighting against their respective enemies on a massive battlefield. The winner of said battle will get to choose witch planet to attack next with the game ending once the home planet of either side is taken by their enemies.

The Campaign mode is told through the perspective at the end of the Star Wars Saga where a young Jedi uncovers the untold history of the Renegade Squadron which is formed after the battle of Yavin IV by none other than Han Solo. The player experiences these battles by playing as soldiers of the Rebellion plus commanders of the rebels like Han Solo and Leia Organa, completing certain tasks for each missions in order to advance. The story is told through comic book style cutscenes with voice overs.

Unlike the previous games, the class system has been redone where players can customize their own soldiers by selecting which weapons they choose to have before a battle. Space battles return for this version as well, with the ability to take command of famous ships like the The Millennium Falcon, Tie-Fighters and Star Destroyers.

There is also online capabilities that can support 16 players through Infrastructure and eight players through ad-hoc with a special spending system implemented to purchase custom kits as well as create new characters from scratch.