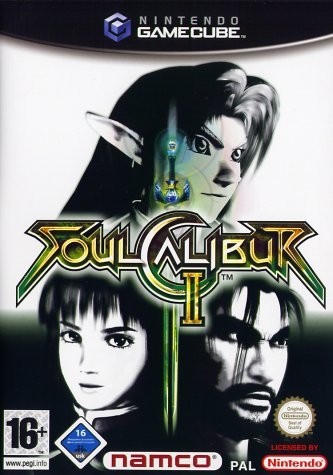 Mortal Kombat-style one-on-one fighting is one thing, but fighting with weapons is completely different. Soul Calibur II continues the tradition set by Soul Blade and the Dreamcast Soul Calibur with intense action and plenty of weapons to deal the massive blows.

A majority of the action takes place in Weapon Master mode, as you choose a character and travel a set map to fight the many other warriors through a collection of different terrain styles and challenges. One minute you'll be fighting in quicksand; the next you'll have to defeat an opponent by only using throwing attacks.

Other modes include the usual arcade, survival, and practice modes, and multiplayer options for two people to battle it out.

Each version of Soul Calibur II also includes a unique character for the platform. Spawn appears on Xbox, Link from The Legend of Zelda series can be found on GameCube, and Tekken fighter Heihachi finds his way to PS2.