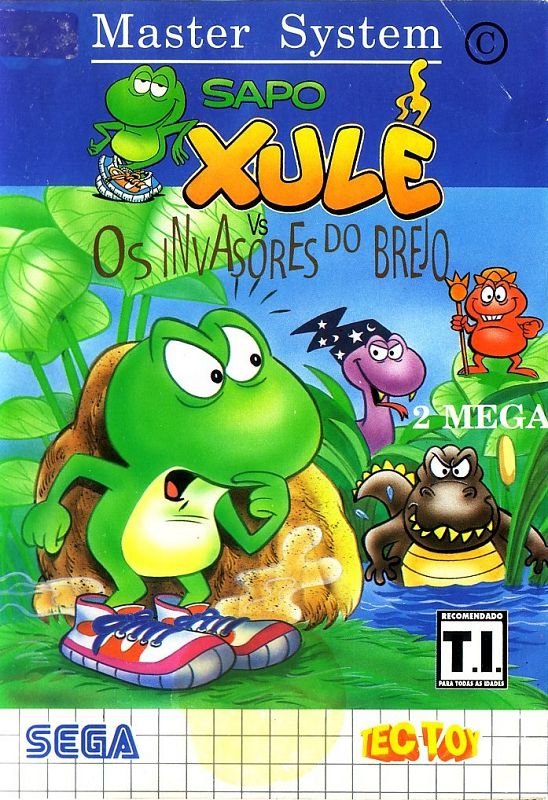 By Nanoman6666 : January 30, 2018
The merciless Sapo Boi, with the help of the evil Lagartão and Sibila, the sorceress snake, recruited an army of monsters to take over the swamp and enslave its inhabitants. He also kidnapped Rãzinha, Sapo Xulé's girlfriend, to make her his princess. Now, Sapo Xulé, along with his three friends (Ratopulga, Porcopum and Tartafede) must to stop the cruel tyrant.

Sapo Xulé vs. Os Invasores do Brejo (which translates Sapo Xulé vs. The Swamp Invaders) is a modified version of Psycho Fox, with its main character replaced by Sapo Xulé, a character based on a popular toy in Brazil back in the '80s; a toad with shoes which, when taken off, release a really bad smell.

In Psycho Fox, the player could also play as three other characters during the game: Hippo, Monkey Boy and Leopard. In Sapo Xulé vs. Os Invasores do Brejo, they were replaced by Porcopum (a pig), Ratopulga (a mouse) and Tartafede (a turtle).

Each character has its own special ability: Porcopum can break rock walls (but he's considerably slower than the others). Ratopulga can jump higher than any other character, while Tartafede is the fastest one. Sapo Xulé is the most balanced of them.

In this side-scrolling/platform game, all characters can kill their enemies by punching or jumping on top of them, until they are completely buried. If they are not buried completely, the enemies will pop out of the ground and come after the character again. Besides the monsters, other common obstacles are spikes, cannonballs, fireballs, pits and more.

The characters can also find Sapo Xulé's stinky shoes, which can be used as a boomerang-like weapon. If they are hit when carrying the shoe, they'll just lose it instead of dying.

To switch among the characters, the player must find green potions, usually hidden inside eggs, or carried by enemies. Other special items can be collected, such as "invincibility flies", Sapo Xulé's stinky socks (which kill every enemy on the screen) and some white bags, which are meant to be used at the bonus stages.

The bonus stages consist of labyrinths with several paths, each leading to prizes or nothing at all. Each white bag collected at the main stages give the player an extra character to set up for a different path at the labyrinth, raising the chances of reaching a prize in the end.