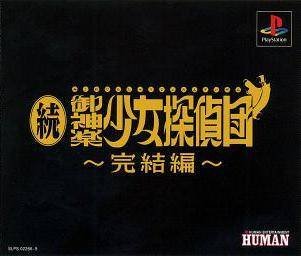 Mikagura Shoujo Tanteidan is an adventure game that got a 3 episode anime series based on it and tells the story of Mikagura Tokito that was the director of a detective agency in the Taisho era, which has solved a lot of cases. One day he disappeared involved in an accident.

The game is about solving different cases the player controls the 3 girls that helps the detective Mikagura Tokito:Tomoe, Shigeno, and Chizuru, who adored him.

This first Playstation game features 6 different cases to solve and more than 30 minutes of animated video sequences. The last story doesn't finish in this game since it finished in the sequel Zoku Migakura Shoujo Tanteidan (that also includes the first part of that story).

GAMEPLAY:
Talk to every character in each screen until each scene is solved, to discover clues sometimes when you talk to a character you have to use the special trigger points (that are only 5) and the scene finished when the scene points bar are filled.