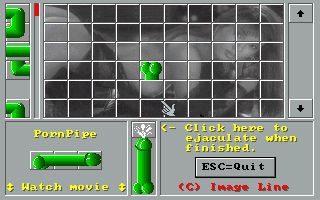 By RomStation : January 3, 2020
PornPipe is a Pipe Dream variant with an adult theme.

There are four levels with four different female models seen in background of playfield. The mechanics of pipe construction also varies. Pipe may be constructed with parts given to the player in random order, or it may be adjusted with parts already scattered on playfield.