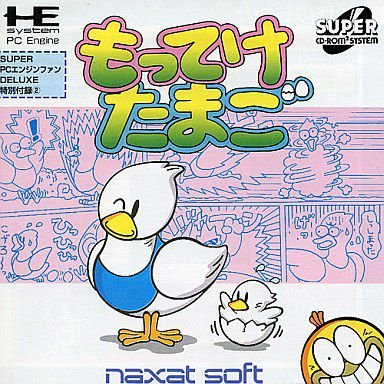 By Tanuki78 : December 2, 2021
Motteke Tamago was included in the second volume of the Super PC Engine Fan Deluxe magazine. It is an action game similar in concept to Bomberman. The game consists of three "worlds", each with ten screens; on every screen, four ducks are competing against each other in collecting eggs and delivering their babies home. The ducks can be controlled by human players or by computer AI. Eggs are being dropped into the maze-like stage; the goal is to collect as many of them as possible. Once collected, an egg follows the duck, and after a while a baby would hatch and return home safely.

Each duck tries to sabotage the work of other ducks by placing fried eggs on their paths. In addition, various hazards and enemies keep appearing, trying to impede the ducks' progress. Ducks can be knocked down, paralyzed, and robbed of their eggs.

Thanks to Dave Shadoff for this english translation.