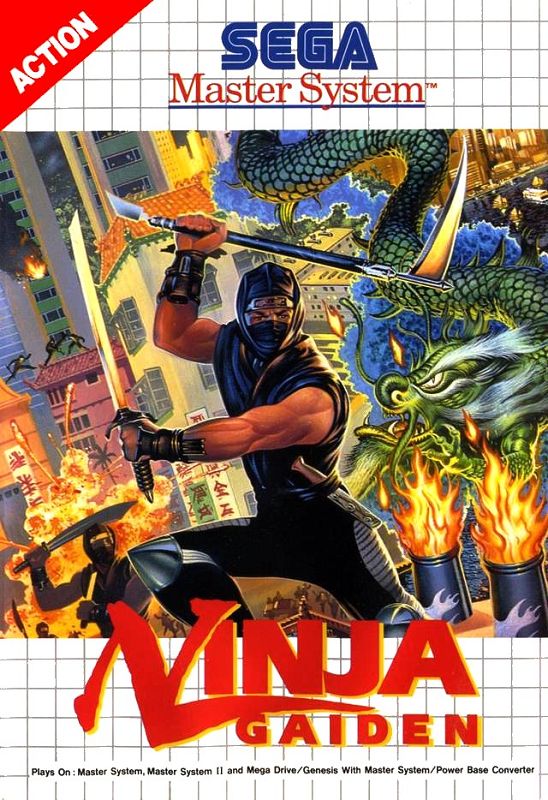 The Master System version of Ninja Gaiden is not a port of the well-known NES game, but an entirely new game (this includes both a different story and different levels) developed by SIMS under license from Tecmo.

The story is also about the original protagonist, the Dragon ninja Ryu Hayabusa, who returns to his clan's village only to find it utterly destroyed and the inhabitants murdered. A single survivor tells Ryu in his last seconds that the Sacred Scroll of Bushido was stolen. With the power of the scroll its owner is mighty enough the gain control of the whole world. Thus Ryu swears to recapture the scroll and the avenge the annihilation of his clan.

The game is sidescrolling platformer/ beat'em up title and incorporates most of the mechanics from the NES games: Ryu can jump and attack with his Dragon Sword. Furthermore, he can collect different kinds of Ninja Magic (which again vary form the powers in the NES games), from shuriken to fire wheels, which can only be used finitely many times, as the use up energy which again must be collected. However, instead of clinging to walls and climbing them, Ryu can push himself off the wall in this game, which must be applied for instance by jumping and forth between two close walls to get higher and higher.

The goal of each level is simply to reach the end of the level before the time runs out. Each level is divided into several sections, and at the end of each level is a boss fight. After beating a boss, a cut scene is shown which continues the story about Ryu's quest for the Bushido scroll and his revenge.

Thanks to Guismof for this translation.
jolindien reacted to this