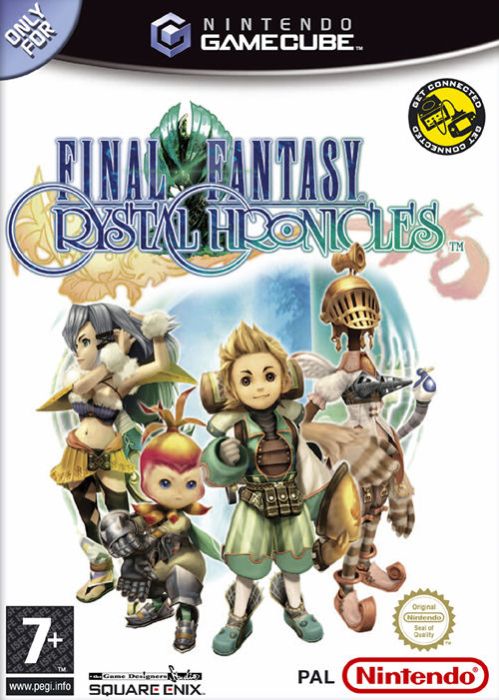 The world is enveloped in a poisonous vapor. Anyone who comes into contact with it must die. But humans have learned to develop a technology that would help them to protect themselves from the deadly vapor. The light of Crystals shines in small villages and in large towns. But those protective Crystals have to be refilled every year with the purifying Mana Water, otherwise their energy will extinguish. Every year, villages send four youths to retrieve the Mana Water that is hidden deep in dungeons and dangerous caves.

Sounds like the story of the first Final Fantasy? The plot of this first Final Fantasy game for a Nintendo console since Final Fantasy VI goes back to the roots of the series, but the gameplay has changed a lot. Final Fantasy: Crystal Chronicles is an action, Zelda-style RPG. At the beginning of the game, the player chooses one of the four available character classes: magic-using Yulks, thief-like Selkies, gentle-natured Clavattes, and cute little Lilties. The game can be played with the chosen character in single-player mode, or, using the GBA-GC connection link, played with three other people, each controlling their own character.

Each character has both armor and a weapon that can be replaced by crafting a new one with the appropriate items in towns. Found in each monster-filled area are artifacts that raise statistic points until the end of the area, and upon completion one artifact can be kept to raise that stat permanently. In a multiplayer game players will be given secret objectives, and by completing their objective they have a chance at claiming first dibs on artifacts at the end of the area. Spells are also found in combat areas, though they can not be taken out of them. If spells are placed next to each other in the quick select list, or cast near each other in a multiplayer game, they will merge and become a more powerful spell. Finally in single player mode a moggle will take care of holding the "bucket" that pushes away the toxic miasma around the party, but in a multiplayer game one of the players will have to take up this ignoble task.