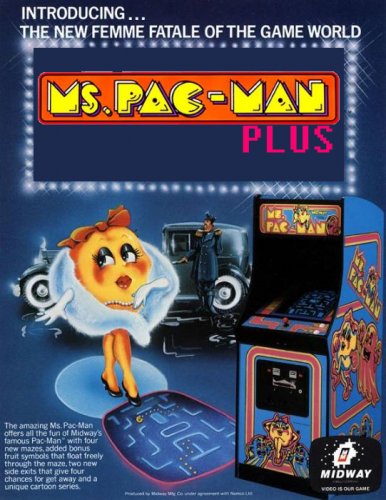 In this, the first proper sequel to Namco's legendary pill eating maze game, players must once again run around a number of mazes, eating all of the pills that are scattered throughout. The ever-present ghosts (Blinky, Pinky, Inky and Sue) return to hamper the player's progress. The infamous 'Power Pills' are also present and correct, with four appearing in each maze.


Namco introduced a number of changes and enhancements over the original game. The first difference is in the main character. For the first time in video-game history, the game's lead character was female. Ms. Pac-Man is almost identical to the original character with two main differences; she wears a bow in her 'hair', and is also wearing lipstick.


Another change from the original is that the bonus fruit items are no longer static but now move randomly around the mazes.


The 1st maze is only encountered in Rounds 1 and 2, and has 220 dots and 4 Power Pills. There are 2 sets of tunnels in this maze equidistant from the center of the maze. You must clear this maze 2 times before moving on to the next maze.


The 2nd maze is only encountered in Rounds 3, 4, and 5, and has 240 dots and 4 Power Pills. There are 2 sets of tunnels in this maze; one set in the lower half, and the other set at the very top. You must clear this maze 3 times before moving on to the next maze.


The 3rd maze is first encountered in Round 6 and has 238 dots and 4 Power Pills. Unlike all other mazes, there is only 1 set of tunnels in this maze, slightly above the center of the board. You must clear this maze 4 times before moving on to the next maze.


The 4th and final unique maze is first encountered in Round 10 and has 234 dots and 4 Power Pills. There are 2 sets of tunnels in this maze, directly next to one another in the middle of the maze. The turns at the entrance to the tunnels change the usual immediate accessibility of the tunnels and should be taken in to account. You must clear this maze 4 times before moving on to the next maze.


After Round 13, the game alternates every 4 rounds between the 3rd and 4th mazes.


Finally, the ghosts' movement patterns are also completely different to those of the original game.


1) Act I - They Meet : Pac-Man, the star of the original game, enters the screen being chased by Inky while Ms. Pac-Man enters from the other side being chased by Pinky. As the 2 of them are about to collide, they quickly move upwards, causing Inky and Pinky to collide. Pac-Man and Ms. Pac-Man face each other at the top of the screen, and a heart appears above them. This intermission is played after Round 2.


2) Act II - The Chase : Pac-Man and Ms. Pac-Man are seen giving each other a playful chase. One chases the other in one direction, and they take turns alternating who chases who and in what direction. After three turns, they chase each other twice more at a faster speed. This intermission is played after Round 5.


3) Act III - Junior : Pac-Man and Ms. Pac-Man anxiously await the arrival of a stork, who flies overhead with a bundle. As the stork is about to pass over them, he releases the bundle, which drops to the ground in front of Pac-Man and Ms. Pac-Man, and opens up to reveal a baby Pac. This intermission, which is played after Rounds 9, 13, and 17, would later serve as the introductory sequence to "Jr. Pac-Man".


No intermission is present between rounds after the 18th one.