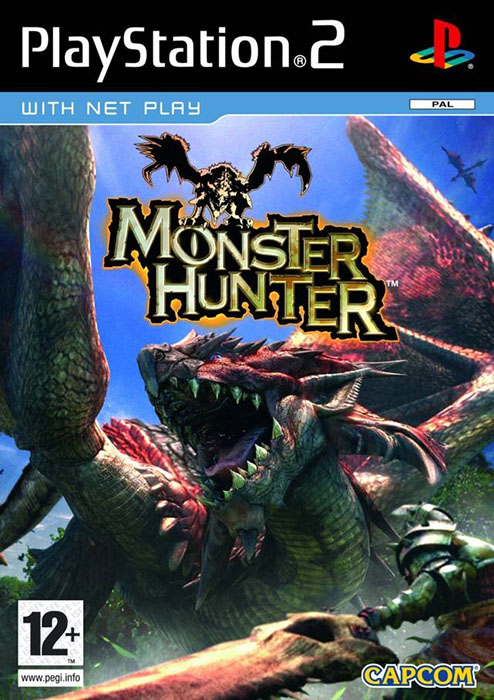 Monster Hunter is a third-person action game set in a kind of pre-historic fantasy world. Many of the creatures you'll see are very similar to dinosaurs, ancient relatives to modern day animals such as boars and insects, and even dragons. Next to a singleplayer mode, the game can also be played online. You can have a hunting party of up to four people, and once you start to go after larger prey, you'll definitely need them all. Every couple of weeks, Capcom organizes online missions. While some are harder than others, they all allow you the chance to create equipment you'd never be able to get if you only played offline.

Thankfully, you won't be fighting with your bare hands. When you first begin your game, you are given a simple sword and shield, but as you complete missions and harvest materials from both the creatures you kill and various nooks and crannies in the environments, you can begin to craft stronger weapons and armor for yourself. On top of that, you can also use berries, plants, shells and more to craft healing items, stat boosters and even ammunition if you opt to use a bowgun.

There are several weapon types in Monster Hunter, including the bowgun (perfect for group support and long-range attacks), Great Swords (huge and slow, but very powerful and a great reach), and even Hammers (The most powerful weapon class, but cannot block). Most weapons can even be upgraded once you create them, allowing you to add damage, sharpness and even elemental attributes.

The game is played out through missions you take from the Hunter's Guild (or the village elder if you're playing solo), and these missions range from material gathering, to egg stealing, and even live capture. Combat is all real-time. The left analog stick moves your hunter while the right stick is actually used for attacking. Different directions on the stick trigger different types of attacks, even allowing for some simple combos.

The story in Monster Hunter is a very basic one. You want to be the best Hunter ever, so you go out to prove yourself. That's really all there is to it.