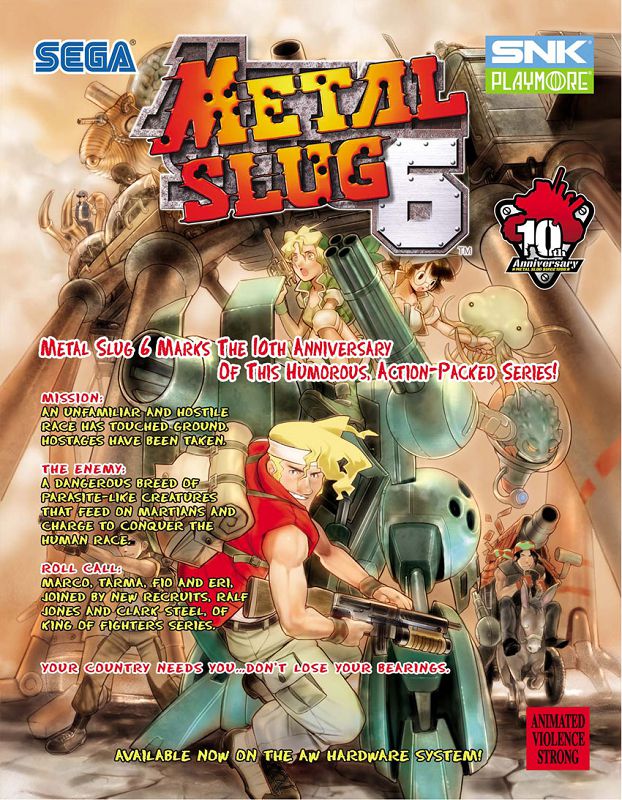 The seventh main game in the series stays close to the fast-paced 2D side-scrolling shooting gameplay of the original, but with a few enhancements. The storyline is reminiscent of Metal Slug 2, X, and 3, as it focuses on the Rebel-Martian alliance where the team, with the help of the Rebels, had to fight the Martians. In this version however, all sides team up to combat a threat together. The four original heroes, Marco, Tarma, Fio and Eri, are joined by Ralf and Clark, of King of Fighters and Ikari Warriors fame, each with different attributes and a special ability. The characters also vary by running speed, the defense abilities when driving vehicles, and the amount of ammo received.

The characters can now carry two power-ups at the same time, and choose to discard one, or give it to another player in the Co-op mode. Next to new drivable vehicles, there is also a new weapon, the Zantetsu Sword, a blade that neutralizes enemy firepower. An additional melee attack has been added, and the sliding technique from the previous game has been removed.

When enemies are killed at a fast rate, more points are received, and this is reflected by a meter at the bottom of the screen. When the meter maxes out, enemies drop coins. Two new difficulty levels have been added: Easy and Hard. In the Easy mode, the fifth and final level cannot be accessed, but instead of the pistol, the default weapon is the heavy machine gun with unlimited ammo.

KyoKusanagi007 and visualist27 reacted to this