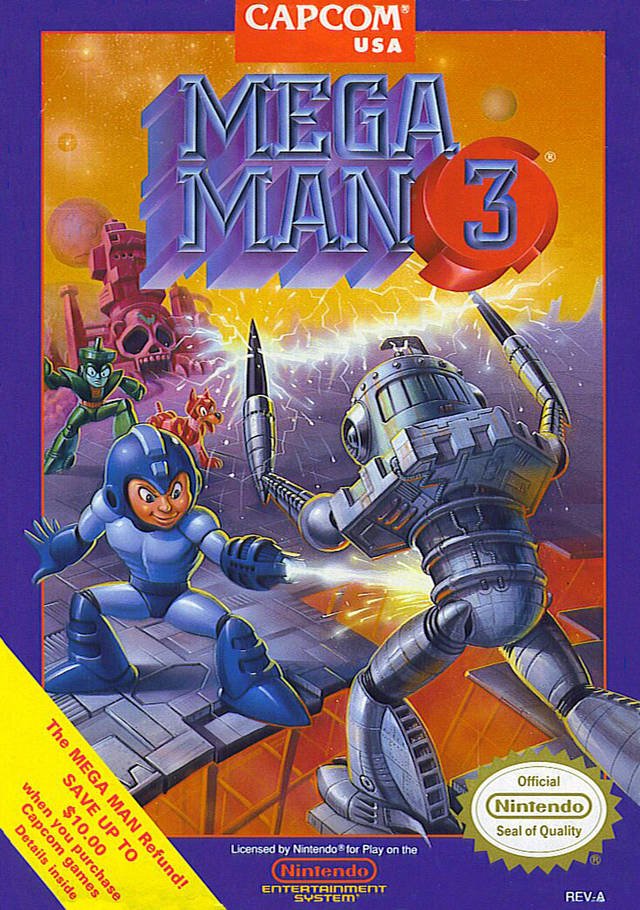 Mega Man 3 is a traditional side-scrolling platformer: you jump from brick to brick while avoiding pits and shooting robots. It's quite similar, in all respects, to other Mega Man games; however, this is the first time that you get a sidekick. It's also the first time you're allowed to slide instead of merely walking.

Rush is your dog who helps out by offering other modes of transportation when you need it. He starts out with the 'Rush Coil' ability to launch you to the top of the screen like a springboard; later he acquires the 'Rush Jet' ability to turn into a guided, floating platform to carry you wherever you need to go; and he also gets the 'Rush Marine' ability which is a submarine that works just like the jet except underwater and with the added ability to hop around out of the water (you can actually jump while on the jet but the jet continues to hover beneath you whereas you stay inside the submarine). All of these abilities function just like boss weapons.

When you defeat the boss at the end of a level you gain his power - or at least a similar power. You may pause the game at any time and switch to any single power you have. It supplants your regular Arm Cannon with a limited - but superior - ability. The weapon ammo is displayed next to your energy meter. There are eight of these, corresponding to the eight main levels, even though there are twenty-one levels in the entire game.

Enemies will often supply you with both energy and ammo refills. You can also collect Energy Tanks which can only be used once but will entirely restore your health. You start the game with three lives. Other features include Surprise Boxes lying around for you to find. There are infinite continues and a password feature to resume play at the beginning of any level.