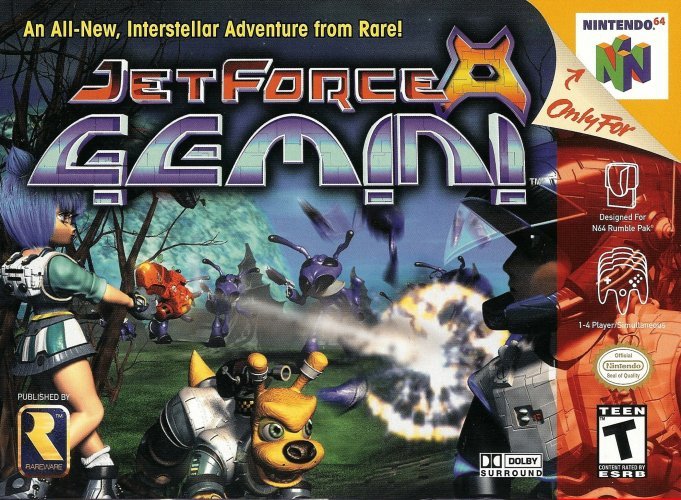 By Tanuki78 : April 13
Twins Juno and Vela, and their dog Lupus, are Jet Force Gemini, intergalactic police. Their mission? Stop the evil space bug, Mizar, from his goal of galactic conquest with his seemingly-infinite army of Drones. They'll have to stop along multiple planets along the way, and assisting King Jeff and rescuing his subjects, the Tribals.

Jet Force Gemini is a third-person shooter which revels in making gigantic creepy bugs explode into dribbly mucousy bits. The Jet Force team are given progressively more powerful weapons, from the Machine Gun, which rips through both enemies and ammo, the Plasma Shotgun, which you can charge up for some explosive fireworks, and the Tri-Rocket Launcher, which fires three rockets with every shot, sending explosive doom in the direction of your target. There's also the Fish Food, which, as the name implies, is used to feed fish.

Each member of the team has their own special abilities - Juno can walk through lava without any trouble, Vela can swim underwater, and Lupus can hover for short distances and travel through tight spaces. These abilities are required to fully access areas that they previously couldn't reach. The team also get the help of Floyd the Droid, a hovering robot that can be controlled by player two as a floating gun with infinite ammo when he joins your team.

The game also includes three different multiplayer modes: Battle - featuring most options of an average First Person Shooter but with a third-person perspective, Target Shoot - a shooting gallery with a first-person view, and Racing, which includes some kart-like racing as well as old-school top down racing games.