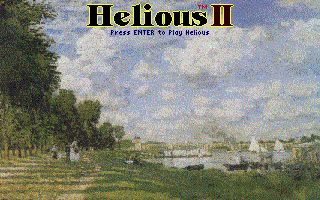 By RomStation : January 3
Helious II is the second part of Helious. The first part was available without charge as a shareware "teaser" where you had to pay for the second part of the game, Helious II. Just as with Helious, you must maneuver a balloon through the different levels. Every maneuver releases air from the balloon, and if too much is released, you lose.

In later levels, various dangers will be added to the levels such as turrents, pins, locked doors, and more. Once you reach later levels, you will get things to throw at various enemies that can attack you rather than just dodging them.