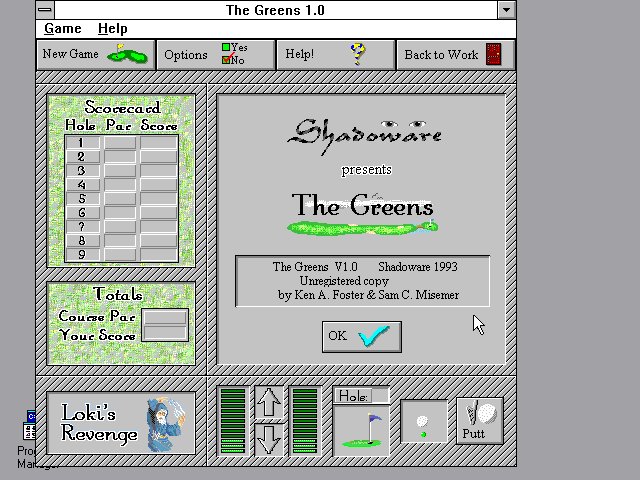 By RomStation : January 27
The Greens is a shareware arcade style crazy-golf game for 1 û 4 players. The game consists of a single screen with all the information presented in a series of windows. The main window in the upper left shows the position of the ball and the topography of the current hole. The player plays the game using a mouse to manipulate the three controls below the main window. The first control is a pair of arrows, one pointing up and one pointing down. This controls the strength of the putt. The second control is a white circle in a grey square. The white circle represents the ball and, using the mouse, the player positions a green dot which marks the direction from which the club will strike the ball. With the force and direction of the shot determined the player uses the third control to initiate the shot. An animation in the main window shows the track of the ball. Each player has a total of eight strokes with which to complete the hole after which control passes to the next player. Should the ball go into a bunker the ball is replaced at the start point. The object of the game is to complete the course in as few shots as possible.Apart from the entry of the players names the game is entirely mouse controlled. It has an in-game help function, and a midi sound track and sound effects (both of which can be disabled) as well as a high score table.The shareware version of the game has five holes. The full version has eighteen holes and uses 256 colours.