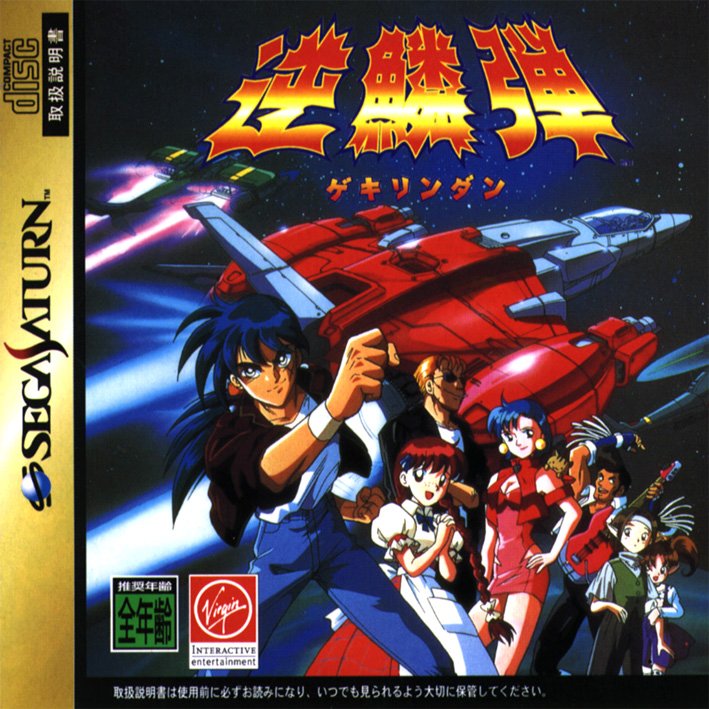 By GambierBae : July 11
Gekirindan is a science fiction-themed vertically scrolling shoot 'em up game reminiscent of Truxton II and DonPachi, where players assume the role of one of the six pilots taking control of their respective space fighter craft (a futuristic fighter jet, a helicopter conditioned for space travel and a remodeled old-fashioned airplane) through five increasingly difficult levels in an effort to effort to defeat Huge Boss and prevent his plan of rewriting human history as the main objective.

As far as vertical scrolling shooters go, the title initially appears to be very standard; Players control their craft over a constantly scrolling background and the scenery never stops moving until a boss is reached. Players also have three weapons at their disposal: the main weapon that travels a max distance of the screen's height, a sub-weapon and three bombs capable of obliterating any enemy caught within its blast radius.

A unique gameplay feature is the main weapon system; Similar to Out Zone, each ship is equipped with two main weapons at the beginning that can be upgraded by picking up "P" icons and switch between them by picking up a "C" icon that alters the player's shot pattern, while sub-weapons appear on certain occasions as colored letter icons (ranging from blue missiles, red napalm bombs and a green homing laser). Various other items can also be picked up along the way such as 1UPs and additional bomb stocks. Similar to DonPachi, players also have the ability to choose between three fighter ship types, each having their own shot pattern: A, B and C.[2][3]

There are multiple scoring methods for reaching high-scores to obtain extra lives in the game apart from destroying enemies.[2][3] Points can be gained from collecting eagle-shaped gold medals and once the level is finished, 5000 points are awarded for every one collected. "Bonus" icons also grant extra points by grabbing them. The game employs a respawn system where in which a downed single player will start off immediately at the location they died at. Getting hit by enemy fire will result in losing a live, as well as a penalty of decreasing the ship's firepower to its original state and once all lives are lost, the game is over unless the player inserts more credits into the arcade machine to continue playing. Unlike previous shoot 'em ups titles released at the time, there are no additional loops after completing the last stage.

The plot summary of Gekirindan is explained through supplementary materials. In the year 3195, a time machine is created on Earth and is promptly stolen by an unidentified mechanized being known as "Huge Boss". This evil entity uses the device to travel back in time and rewrite 3000 years of human history. The only resistance Huge Boss faces is a group of six fighter pilots from multiple eras who aim to stop him, although some of them have their own motivations other than saving mankind.