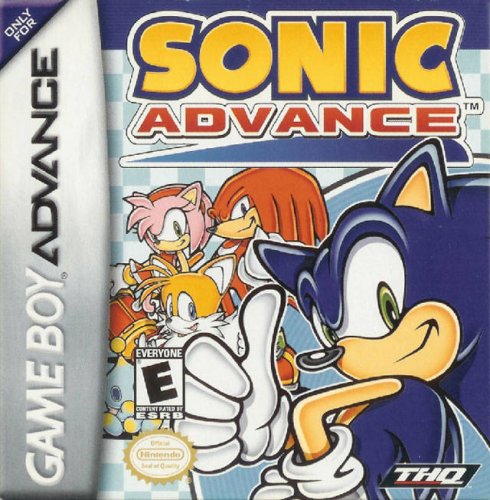 Here is our famous blue hedgehog, Sega's mascot since the company's origins and the emblem of a whole generation of gamers, for the first time on a console belonging to his former enemy. A page in videogame history has been turned, and Sonic fans are now joining Mario fans on the GBA to indulge their common passion. In such a context, Sonic Advance is the perfect opportunity for all the players who missed the speedy adventures of the blue hedgehog to make up for lost time, and for all the others to reconnect with a gaming experience that dates back to the blessed era of 16-bit consoles.

Because if time has passed, the recipe has remained the same since the first episodes. Sonic is still a game with many pitfalls, governed by a single law: speed. As soon as the player has taken a few hesitant steps on the not very reassuring ground of the first level, he is suddenly thrown into a jumble of steep slopes at supersonic speed. The sensations are the same as a first descent in a roller coaster, and it's without really understanding what's happening on the screen that we chain together crazy loops and jumps above the void. The architecture of the levels is surprisingly well thought out, with each stage full of junctions and shortcuts, not to mention the multitude of hidden bonuses that only a player who knows each level inside out will be able to collect in their entirety.